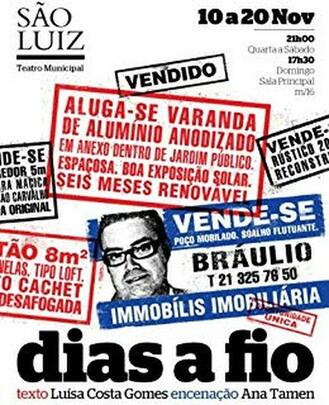 ACT I /Vertical/ Scene 1
A man falls from the ceiling. He is hanging by his ankles from a rope.
He says:
It happens to everyone. Sooner or later. You look for your shirt in the top drawer, the perfectly ironed white shirt, and you find, carelessly tucked away, the weapon that has just killed a woman. It is either a knife, or a revolver, or a rope. Who killed her is the subject matter of this episode. We will be forced to see through flash back with no compassion whatsoever, every single detail of her violation. The torture she was subjected to, relived by ourselves, her spectators, is a new injury to her and to us. Her death is precise, plastic, musical. Sitting with our hands on our laps, we assist. We are the audience. The morning after, we will be ready to sign petitions. The petition not to cut in half a village where there are people who live happily in the midst of nature and their village, the petition not to cut anything in half, the petition not to cut, the petition not to let die some animals who are dying, which are being left to die in the most inhumane fashion, the petition to free a woman who was unlucky enough to be born in a country where it is always unlucky for women to be born, the petition not to say “old
man”, the petition to start saying “senior citizen”,the petition to write fact in a peculiar spelling, the petition to stop hanging people from their ankles!
(from the right enters a BEAUTICIAN who is pushing a massage table. FLORINDA , the real estate agent, is lying on it, eyes closed. The Beautician looks at the Man hanging from his ankles, waits for him to keep still. The Man moans in pain. The Beautician parks the table center stage, right underneath the Man. The Man tries to grab the rope he is hanging from. He screams:
Let me up! That ́s enough now! Pull me up! Well, cut the rope, then! For heaven ́s sake, let me fall! There ́s nothing to see here. No, wait.
(He looks at the audience)
No, there ́s nothing to see here.
(Another scene further ahead)
FLORINDA and PALMIRA, the two women real estate agents, are stage right looking into the depths of a pit.
FLORINDA – Ten feet wide. How deep?
PALMIRA – It ́s deep. About fifteen feet, I ́d say.
VOICE FROM THE BOTTOM OF THE WELL – It ́s twenty feet deep, Ms Florinda. FLORINDA – And are you the owner?
VOICE IN WELL – The pit is a rental, Ms Florinda.
FLORINDA – We happen to have a very fine basement, nine square feet. It has no windows, of course, but it is not very damp either.
VOICE - (ecstatic) - A basement? I ́m afraid that it will be a little over my budget. I am on a tight budget. It ́s just enough to rent the bottom of this well for the time being. I dream of a basement with a door at ground level.
FLORINDA – A door at ground level? Sure. What you absolutely must have is a budget. If you did not have any budget al all, of any kind, then we would not be able to strike a conversation.
PALMIRA – It would be unethical.
FLORINDA – The basement that I have for you is very nice, but alas it has no door at ground level. It is very central and buses and trains are very nearby indeed.
PALMIRA – (softly) It ́s in an underground parking lot.
VOICE IN WELL – I dream of a cozy basement, not too warm, not too cold, not too wet, and I dream of hearing the steps of passers by, the music of their scurrying, the steps of the despairing, the steps of the one that is just trying to make a buck, the one that drags on, the timid nun, the child crushed by the weight of its backpack, the one who is already dead when he goes to work, the one with the heavy hungry steps, the smart one, light footed, the competent stroll of the cleaning women, the high heels piercing the sidewalk, the bosses and bosses to be that I would be able to tell apart by the weight of their bones, and the ground level receiving all that weight and all those steps. Cement also aches. And underneath the cement, the earth...
FLORINDA – (interrupting) Well, the sidewalk is not cement, it ́s Portuguese handicrafted stone. But you know best. I am leaving my card. (She throws her card into the pit) You can stop by the office at any time, we ́re always open, Saturdays and Sundays by appointment.
PALMIRA – Have a wonderful day.
VOICE IN WELL – Thank you very much. You too.
FLORINDA – Yes, have a nice day. (To Palmira) What a waste of time.
PALMIRA – I ́ll take care of this, if you ́re so sick of it...
VOICE IN WELL – Could you please lower the water bucket, Ms Florinda? FLORINDA – No, I don ́t want you to take care of this. It ́s just that it is always the same story, Palmira, days on end the same. Basements, caves, attics, pits, garages,
terraces, stairs, corridors, ground level studios at the back of cemeteries. Miserable hungry people, old farts with nothing to their names, women alone with a bunch of kids. You just cannot strike a deal. The big companies get the condos, the villas, the flats and we are left to scrounge the bottom of the through.
PALMIRA – But the pit has a very good price, now.
FLORINDA – We have to value the pit, it ́s all that we have got left!
PALMIRA – Try and compare with the prices from ten years ago! It is exponential! FLORINDA – But who ́s going to give him credit now, even if it is to buy a pit? He has no collaterals whatsoever!