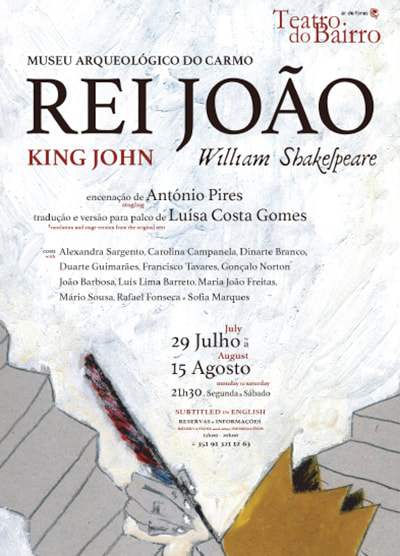 ​William Shakespeare
THE LIFE AND DEATH OF KING JOHN

Synopsis
Richard the Lionheart (Coeur de Lion) has died and Prince John, his youngest brother, is now king of England.  Chatillon, the ambassador of King Philip II of France, arrives at the English court and demands that John, the ‘Usurper’, abdicate in favour of his nephew, Arthur of Brittany, son of Geoffrey of Brittany, John’s elder brother.  The king of England declines and sends him back to France with a declaration of war. He then turns his attention to the curious quarrel between the Faulconbridge brothers.  Eleanor of Aquitaine, John’s mother, recognises in Philip Faulconbridge the features and bearing of her son, Richard the Lionheart, while John likes his plucky spirit and welcomes him into the family as his older brother’s bastard. He is knighted as Richard Plantagenet.
The French and English forces meet at the gates of Angers, siege of the Plantagenet “empire”, in the West of France.  Fighting for the rights of Arthur are Philip II of France, his son Louis, and Limoges, the Duke of Austria, the infamous assassin of Richard the Lionheart.  The citizens of Angers pressed to choose between John and Arthur, insist that it is not a matter for them to decide: both armies should decide between themselves.  The armies take up their positions on the battlefield and fight for Angers.  The citizens of Angers remain neutral until The Bastard, Richard Plantagenet, has one of his “moments” and suggests that the English and the French should join forces and destroy Angers together. Faced with this argument, the citizens come to their senses and suggest a matrimonial alliance between Louis the dauphin of France and Princess Blanche of Spain, niece of King John. The marriage is hurried along before anyone can change their mind. Meanwhile, John is excommunicated by the pope’s envoy, Pandulph, for not enthroning the Archbishop of Canterbury nominated by Rome. Peace is short-lived and secured at the expense of Arthur and Constance, the widow who depends on the power of France to assert her son’s rights.  But now, France´s new ally, King John , being excommunicated, has become a liability for France. The newly-weds find themselves at odds and the pope’s envoy incites the French to launch a holy war against the excommunicated King John.  John returns home, Arthur is brought to England and John darkly hints to Hubert that the boy be executed. Arthur is terrorised by Hubert in scenes of such savagery that they would seem gratuitous were it not for their immense symbolic power, which reveals the full range of the unhinged imaginativeness of petty people with petty powers.  Traumatised, the angelic Arthur ends up getting himself killed trying to escape.  Before any self-interest or convenience, Arthur is a child, love is his kingdom and his destiny is to be sacrificed. The English barons, appalled by such barbaric behaviour and suspecting King John of the foul deed, switch sides and join the French.  John, abandoned by his vassals, ends up accepting that the papacy should mediate peace with the French, who seem to be winning the war. By the time it becomes known that French reinforcements have been shipwrecked, King John has already fled the battlefield and is lost and sick, poisoned by a monk in one of the abbeys he had ordered the Bastard to sack. What goes around comes around. Then, out of nowhere, and very conveniently, there appears a Prince Henry, John’s son, who inherits a nice, clean kingdom free of conflict.  It is up to the Bastard to save the day and say a bit of patriotic verse about England’s independence, which, in the light of everything we’ve witnessed here this evening, seems more like an intermission, a coffee break, before the bloody following scenes.


The Life and Death of King John is about the process whereby John Lackland, who reigned between 1199 and 1216, succeeded to the throne and how his right to it was challenged by Philip II of France. The play is very loosely based on historical facts and intriguingly fails to refer to the most important events of John Lackland’s reign, particularly his many clashes with his father and brothers, especially Richard I, his repeated acts of disloyalty, the alliances he pursued by obscure or openly repugnant means, and the events that end in his having to sign the Magna Carta.  It is true that delicacy of feeling did not abound in the Plantagenet family, but John Lackland is the king that first springs to mind when one thinks about abuse of power.  He was an unpopular, disagreeable king in life and art, and yet, in this play, he is no worse than a character in some operetta.
Printed in the first Folio in 1623, The Life and Death of King John was already in circulation by 1598 and is believed to date from the early 1590s.  It sparked some interest at first, but was then forgotten, only to be rediscovered in 1730 and performed throughout the nineteenth century.  It was forgotten again in the twentieth century and became known for its “Shakespearean obscurity: unread, unperformed and unloved’ (Lander & Tobin, 2018). That is, until 1970 when it was performed at Stratford-upon-Avon in a collage version, a burlesque satire with Patrick Stewart as King John.  At the time of its writing, it was considered anti-Papist defamation ( obviously omitting King John’s final swearing of fidelity to the Pope) and seen to rehabilitate John Lackland as a kind of Henry VIII avant la lettre. It was also viewed as a portrayal of a weak king, defeated by adverse conditions, or else as a eulogy for a strong king at war with Catholic barons, a hymn to religious liberty.  It was called “Shakespeare’s most political play”, a patriotic text lauding British independence and isolationism; but it can also be understood as a burlesque comedy about the legitimacy of power, behind-the-scenes politics and the anarchy brought about by self-interest.
As far as is known, this is the first time this play will be performed in Portugal. There have been several Brazilian translations, while in Portugal there is an earlier translation by Henrique Braga, published by Lello & Irmão, and a recent one by Nuno Pinto Ribero, published by Relógio d’Agua in 2019.  My version is written to be performed on stage and was originally translated in blank verse from the Arden (Lander & Tobin, 2018) edition.