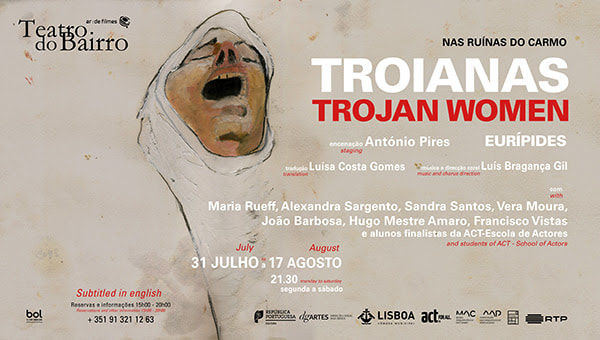 Actors: MARIA RUEFF, ALEXANDRA SARGENTO, SANDRA SANTOS, VERA MOURA, JOÃO BARBOSA, HUGO MESTRE AMARO, FRANCISCO VISTAS e os alunos finalistas da ACT – Escola de Actores Álvaro Aragonez, André Vazão, Beatriz Garrucho, Carlota R. Marques, Carolina Azevedo, Carolina Lopes, Eva Fornelos, Gonçalo Pinto, Inês Gomes, Inês Mata, Inês Meira, Pedro Nunes, Rafael Costa Diaz e Rui Teixeira.
Music and Chorus Direction: LUÍS BRAGANÇA GIL
Movement: PAULA CARETO
Sceneries: JOÃO MENDES RIBEIRO
Figurines: LUÍS MESQUITA
Photos by Luísa Ferreira
Trojans is the second play of a trilogy which Euripides presented at the feasts in honor of Dionisus in the year 415 BC. Only a few fragments remain of the previous two plays, Alexandros and Ganymede. With this tragedy, Euripides came second in the competition. Maybe one can easily figure out why. No one likes to see himself portrayed as a savage. In fact, the dominant point of view in this play is that of the Queen of Troy, now a slave to the vile and treacherous Ulysses. None of the other points of view has the same strength, the same grandeur, nor the same dignity. And she regrets - now indignantly, sometimes pathetically - the chaotic destruction that crushes and annihilates, disrespecting even that which is sacred both to winners and to losers. Here we contemplate the winner’s hybris, the arrogance, the omnipotence which not even the gods, submitted to Diké, can boast of. But winning the war tricks the victors into assuming that they can do anything. Trojans is a long prologue to their future sufferings, foretold by Cassandra, the priestess of Apollo, daughter of Hecuba, taken by Agamemnon to be his concubine. The sequence of horrors at the end of the Trojan War is such as to embarrass even the messenger. Talthybius, a messenger who may remind us, in his meekness, of the The Good Soldier Chveik, does his best to convey the message that he has no responsibility in the killings he is obliged to announce.
Trojans is a tragedy that asks for compassion for the enemies. That calls for humanity in war and rationality in destruction. That asks for justice when it self-love and interest are at stake. That asks for respect for those who have been deprived of everything and demands silence so that their lamentation can be heard. All these are sublime values that raise the level of the human - and the assembled armies of the Greeks, after the defeat of Troy by a petty stratagem, do not look good in the picture. One can raise the question whether Euripides was commenting on the recent expedition to the island of Milos, sacked and destroyed in the winter of 416-415 BC or on episodes of the Peloponnesian Wars that opposed Athens to Sparta, and whose earlier minor conflicts dated back to 460 BC. But this century is full of conflicts suitable for the subject of tragedies. The fifth century BC began with the war against the Persians and the Athenians won the two decisive battles, Marathon and Salamis. After the formation of the League of Delos the Athenian hegemony in the Aegean Sea consolidates its empire. It is only natural that the meaning of this civilization and of this devastation should be discussed in Athens, along with what it meant to be "Athenian" rather than "barbaric." And Euripides puts into Cassandra's mouth this simple truth: the Greeks came to Troy "not because they lacked the land to live on, or because they saw the high towers of their cities destroyed." They came out of greed, disguised as wounded self-love, and razed the city to the ground leaving with the spoils.
Trojans presents the tragedy of women: sacrificed to the gods, abducted, treated as "mere plunder," says Andromache, the widow of Hector, the king of Troy. It is a true survival manual for the oppressed classes. The female characters are archetypes still recognizable today: Hecuba, the Old Queen-Matriarch; Andromache, the Housewife and Mother, whose virtue is the subject of male lust; Cassandra, the Delirious, possessed by the god, whose sacred virginity is the subject of male lust; Helen of Sparta, the Supreme Beauty, Goddess and Hetaira, whose beauty is subject to…etc. And the chorus of slaves, who can only imagine their future master, and hope that at least he lives in a fertile country and is a good and happy man.